"Through photographs, each family constructs a portrait-chronicle of itself—a portable kit of images that bears witness to its connectedness. It hardly matters what activities are photographed so long as photographs get taken and are cherished."

Traveling around Sri-Lanka in March 2013, my husband and I came across a shoebox full of old pictures in one of antique shops. There were a lot of peculiar and charming snaps, among which it was found a series with dog, cockerels fighting on a table against some black fabric, compositions of insects, a deer yoked into an infant sleigh, whimsical snowmen, curious portraits and so on. There were approximately 700 photos. Watching them I was dancing and singing, exclaiming from pleasure. I selected 300 photos of them. On the way to the hotel, while I was seating in tuk-tuk, holding the wrapped photos tightly and felt that I had found a real treasure. 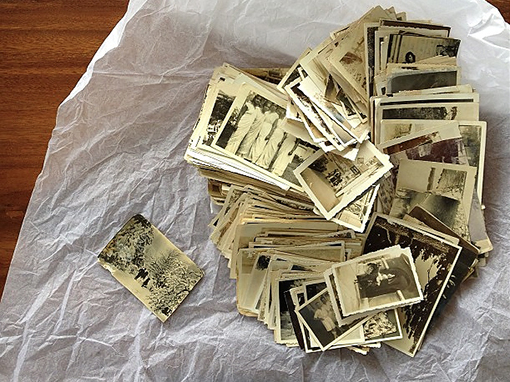 When I returned to Moscow I started learning the pictures and realised that I had bought a personal photo archive, which depicts 50-60 years of a family life. I could single out two main persons of this archive – Helene and Violet. Their names were written on the verso of some pictures - names, places and dates, without surname.

I made few attempts to sort out this archive on my own, but it turned out quite hard. In order to understand how to start working with material and find out more information I took part in a workshop of Dutch photographer Andrea Stultience in Saint Petersburg in June 2013. At last, I could see the structure and got personal feelings about the archive. I also set a goal - to find an owner of these photographs and reconstruct a family archive.

The title of the project appeared from the inscriptions in the pictures. I created all possible connections between characters, placed in snaps. However, I still didn’t have any surnames and consequently there was no any reliable information. 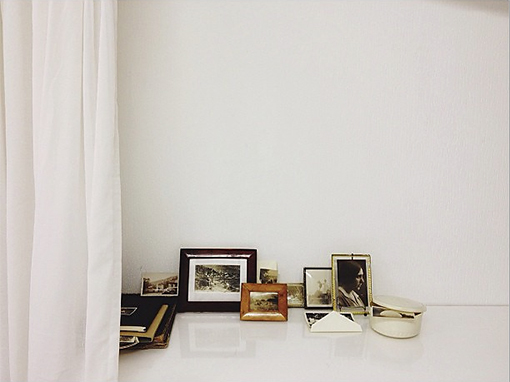 All that time I had a feeling that the mystery was about to reveal to me. I only should keep searching and not to give up. The pictures are skilfully shot. I did enjoy the images, tracing how faces of the characters were changing during the years: girls becoming women, parents getting older.

I was longing to solve the mystery. How could it happen that all these photos, visualising a half century of rich family, ended up in antique shop? In a year, I had found this archive, my friend Karina travelled around Sri-Lanka. Her trip sparked me off to obvious idea to find out address of the shop and the owner, who had sold me these pictures. I hoped that he could know something that would help me in my research.

Family name revealed so desirable information to me. Finely it was a real treasure which I was so eager to find. I discovered that I had bought a photo archive of the Rusts family, a British dynasty of photographers. They lived in Sri-Lanka and India during the period of British colonization, owned properties in different continents, cargo ships and tea plantations. Though, most of all they were obsessed with the wanderlust.

The head of the family Thomas Alfred Rust began his career as a photographer in 1860s, 20 years later after photography had been invented. He had studios in London, and in 1874 Rust opened five of his own studios in India (Allahabad, Mussoorie, Murree, Landour and Meerut). He was patronized by h.e. the earl of Mayo and by H. R. H. the Duke of Edinburgh. Thomas Rust’s landscapes are considered very artistic and he may well have had some formal training in this area. He was also famous tableau vivant or “living picture” (was one of the most popular forms of amateur performance and entertainment for the middle and upper classes during the nineteenth century). His son Julian Thomas Rust joined the firm in 1899 and continued until 1914. Julian Thomas Rust was well known as a portraitist. His images of rich and famous brought him instant recognition and fame, so he was a man of considerable means. In 1933 he made pictures of young Indira Gandhi, which is proved by correspondence by Indira Gandhi & Jawaharlal Nehru (Book Two Alone, Two Together: Letters Between Indira Gandhi & Jawaharlal Nehru 1922-1964, Sonia Ghandi).

Now days the photographs, made by Thomas Alfred Rust and Julian Thomas Rust, are in the following collections: The Alkazi Collection of Photography, Harry Ransom Centre (The University of Texas and Austin).

They are also sold at Christie's and Bonham’s.

During two last year I had a feeling that I’m reconstructing an archive of my own family. This family became a crucial part of my life as if I were a relative. I bring the portraits to live giving them my own sense. I would like to tell my story and the same time I want to keep it in secrecy. Their lifestyle inspires me with the numerous trips, fashionable clothes, bathing in rivers, seas and pools with columns, horses, lavish interiors, cars, mansions, picnics in the gardens. As for me this is an idyllic portrait of happy family and beautiful life, which I would like to share.

Julian Thomas Rust had three daughters and a son, none of whom married.

That generation was the last in this part of the family. I have found relative on parallel family line. Her name is Frances. She has been learning her family history for 30 years and has never seen this part of family before even in the pictures.

These photographs are being published for the first time. 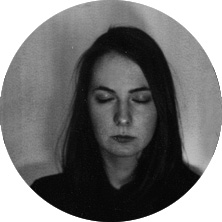 Anastasia Markelova is a photographer and novice collector. She works with family photo archives.